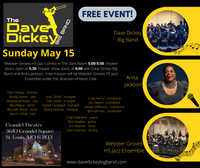 FREE CONCERT! Very thankful to have a private sponsor to make this a free concert! Anita Jackson will be a guest vocalist with the Dave Dickey Big Band. Webster Groves HS Jazz 1 will play during intermission and several of their students will sit in with the Dave Dickey Big Band last set. Big Band concert in the theater will begin at 6pm (theater doors open at 5:30pm). Also Webster Groves HS Jazz Combo will play in The Dark Room (jazz club in the lobby of the Grandel Building) from 5-6pm. General admission and no reservations for tickets.